When developing the electromechanical punch head for its new TruPunch 3000, Trumpf Werkzeugmaschinen GmbH & Co. KG sought cooperation with Bosch Rexroth. Werner Erlenmaier and Stefan Büttner of the Trumpf organization report on the questions they posed and the answers they got.

Even though machinery concepts and technologies – like press punches – appear to be fully mature, they nonetheless harbor great potential for innovations. If you are not satisfied simply with optimizing existing concepts but instead take a step back, you can often find new ways to boost machinery productivity. The Tru-Punch 3000 is the first punch to eliminate the scrap skeleton. Nothing is left on the work table, nothing need be cleared away. That saves labor and reduces material consumption by ten percent on average. Among the reasons for this are machine functions that are also controlled by Rexroth, and the programmed functions for sheet metal machining.

At the outset we weren’t looking to build an entirely new punch press. Instead, we just wanted to modify a single important component: the punching head. This was no longer to be powered hydraulically but was to incorporate a servomotor. Our main hope was that this change would reduce power consumption. Trumpf had developed and patented a drive mechanism specifically for the electromechanical punching head. That mechanism guaranteed precision even at great dynamics. Instead of powering punching head rotation and the stroke action separately, two synchronized motors drive both movements.

If the two threaded spindles rotate uniformly in the same direction, the tool can turn endlessly – to rotate a separation tool, for example. If they are driven in opposite directions, then the plunger executes a stroke (see the illustration).

Thus the construction principle was finalized before we started looking for appropriate controls. The demands were extremely high, since we were aiming for punching frequency of 1,000 strokes a minute, at increments of just one millimeter between punches. The capabilities of the Motion Logic Drive (MLD) in the IndraDrive concept – with its position regulation cycle of just 0.5 milliseconds – were what convinced us. We collaborated with Bosch Rexroth once again when developing the electromechanical punch head.

We held regular development conferences where we devised a mechatronic subsystem solution in which the complex kinematics are mastered by the decentralized controls located right at the drive. This combination of centralized and distributed control reduces the system’s complexity. The IndraMotion MTX, incorporating a CNC system, controls the main axes for the machine whereas the punch head kinematics are controlled by an MLD regulator, located on the drive side and close to where things happen, i.e. in the servo drive. The superordinate IndraMotion MTX sends the setpoint values to the drive-based controls in hard real time. In this way we attained the computing speed required for the desired stroke frequency.

This enabled faster responses, made it possible to correct positions to compensate for temperature fluctuations, and in the marking mode permitted up to 2,500 strokes per minute using the setpoint value generator internal to the drive. Also included was velocity adaptation to make for quiet punching. When rotating the tool the critical question was: How exact is positioning? Here the intrinsic stiffness of the motors proved to be a challenge.

The values placed in memory, describing stiffness during rotation using the ball-type linear drive, are usually not exactly identical. Given the facts that we drive two motors in combination and require great accuracy, we had to compensate for the divergent stiffness values by modifying the parameters in the controls. The IndraWorks engineering tool also makes available a uniform software tool that interfaces with the CNC, the Motion Logic System, and the drives. This simplifies programming and commissioning the machine.

The second major topic in these development conferences was energy use.

It was not possible to satisfy these three requirements either with pure feed supply units or with regenerative power circuits. We asked Bosch Rexroth to find a solution to this problem. Software was written specially for line supply modules capable of operating in the regenerative mode and used in conjunction with the modular IndraDrive. That software ensures that there is a virtually constant load on the power supply, even with severely fluctuating process outputs.

At the same time, the intermediate circuit is independent of the line voltage within the variable voltage range. Energy buffer capacities in the intermediate circuit avoid returning voltage to the grid. Excess energy is stored in a capacitor and is then reused to drive acceleration. This Smart Energy Mode thus joins the advantages of feed and feed-and-return power units. Whereas in conventional solutions the cyclical acceleration and deceleration of the punching head results in high cyclical loading for the grid, the load on the line is now reduced significantly. Performance, on the other hand, remains constant.

Lower demands on the line supply

This saves energy. The power peaks on the line side, when compared with the conventional solution without the Smart Energy Mode, are more than half – from about 50 kilowatts to 22 kilowatts. At average machine working speeds, mean power consumption is reduced by 30 percent, to 5.9 kilowatts. The thermal loading of the supply module used here drops from 95 to 65 percent. In the meantime our customers report that the maximum run-up currents for the TruPunch 3000 are less than for competitive products – but at identical power consumption.

Thanks to the internal capacitor, the buffer batteries can be smaller in size, since the demands on the grid are lower. That reduces costs, as does the significantly reduced energy consumption per cycle and the lower connected load for the machine. Thanks to the improved compatibility with the line (cos phi and TPF = 1.0) and reduced losses in the line filter and choke, users now profit additionally from reduced system perturbation. When the punching head reached maturity for mass production, it could be used in the new TruPunch 3000. There it made for an additional boost to the machine’s overall efficiency level. 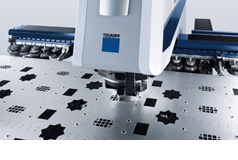 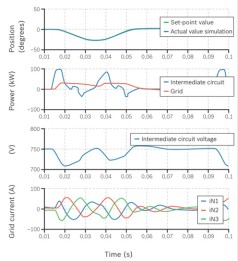 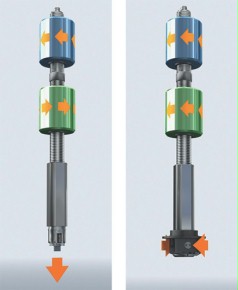