“We are demonstrating the feasibility.”

Professor Detlef Zühlke has been working on components for the Smart Factory since 2005. With an example factory at the German Research Center for Artificial Intelligence, he demonstrates that the Smart Factory is feasible.

Professor Zühlke, what does the Smart Factory mean for you?

For me, the Smart Factory is at the heart of everything that is publicized under the slogan Industry 4.0. The Smart Factory will be the key element in shaping the industrial sector in the future and will have a decisive impact on competitiveness. In concrete terms, the Smart Factory means that manufacturing modules will become autonomous objects, which are horizontally and vertically networked and are organized using new control environments. Everyone can communicate with everyone else and the concept of plug and play is reality.

You have been working on the concept of the Smart Factory for a decade now. What is your provisional assessment?

The phrase ‘revolution in the factory’ puts the ten years into perspective. This process of renewal is also a continuous development. Nevertheless, I am very satisfied with what we have achieved. In the SmartFactoryKL we have built a fully functional digital production system with modules from different manufacturers and have thus demonstrated its feasibility.

Was the road to where you are today always straightforward?

No, we took some wrong turns occasionally. When we began in 2005, for example, wireless was considered to be chic. “Great2, we thought “no cables needed”. That was until we found out what problems are connected with the wireless frequency band and secure wireless communication. The result after two years of work: back to using cables. In the meantime, we also changed our strategy. Here’s one example: Along with the smart devices, cyberphysical systems, in other words component assemblies that are capable of communication via a data infrastructure, came along in 2008/09. Both were components in our self-made demonstrator at the Hanover Fair in 2012 and 2013. That’s all well and good, but the whole thing was not really useable at the time. And we came to the realization that change in large steps caused everyone involved to feel overwhelmed. Nobody was prepared for the fact that, when it comes to the Smart Factory, the entire engineering capabilities had to change. The mechanical and electromechanical integration of systems is a visible prerequisite, but how does a producer acquire data and interfaces for monitoring, planning, controlling and simulating the manufacturer-specific products? This gave us the impetus to jointly build the currently existing Industry 4.0 pilot plant, the SmartFactoryKL together with other industrial firms. We have deliberately slowed down in order to have everyone on board.

We connect horizontal and vertical modules and systems from 16 different manufacturers based on our jointly developed standards. And we don’t discuss much, instead we just do it. Let me explain using an example. The standard Ethernet, which we currently use, is actually not suitable for industrial applications. It is not adequate for true real-time applications. We therefore welcome the initiative of the Open DeviceNet Vendor Association. The optimization of machine integration offers an open machine data model that takes us a big step forward on the path to an industrial Ethernet standard. By working together with Bosch Rexroth, we are going to integrate the new data model into the production cell in 2016. Such an approach could not have been realized without the previous cooperation. Sitting alone at the table and saying “Yeah, that’s what we need” isn’t how it works. We need the opportunity to try something out together, to permit mistakes, to recognize limits and to then plan further steps together.

Meanwhile, there are also the first industrial pilot plants. How do you feel about that?

Many companies are feeling the pressure and want to get ahead. But at the same time they see that the market does not offer anything you can buy. And so they take action. Just like Bosch Rexroth with its multi-product line in Homburg, other companies are taking their first steps. With a wide variety of approaches. But that’s quite normal in these early years. And even if pure part tracking and control via RFID still does not represent a Smart Factory – every start is an important and an appropriate first step.

Can the local lighthouses serve as a blueprint for the global roll-out?

Of course. What has proven effective, for example, at Bosch Rexroth in Homburg, could well serve as a model for a business in the US or in China – with the appropriate adaptations on site. The decisive factor is the smooth interaction of all components. In the future it will not be the case in complex scenarios that the products alone control the production – without any central authority. That only works for simple products with a low level of vertical integration. The situation is different for complex, multi-variant products. The manufacturer cannot suddenly produce endless stock, so the process needs to be planned. Centrally. Then the fine adjustments are carried out locally.

Let’s look to the future: What are the major challenges?

We need worldwide standards. But unfortunately, the Babylonian confusion of languages around communication protocols will still accompany us a while in my estimation. Also in terms of security and safety a lot still needs to be done. Both in terms of data security and protection against cybercrime, as well as in terms of operational reliability. There are still too few activities. We have to break out of the academic circles and think mainly in terms of products. Because security needs an engineering process, too. There are unanswered questions regarding the legal framework of the Smart Factory. And last but not least, it is important to try new business models and to create new job descriptions.

Who is driving the development on the international stage?

Although Germany has lost some time, other countries also did not fare so well. When it comes to procedure, Japan is comparable to Germany, but it lost a number of years as a result of dealing with the consequences of the tsunami. The concept of the Smart Factory has only been on the agenda since 2015. China is the country where the most things are likely to happen. Money and manpower are available – now it all depends on the ideas. But I don’t expect any new impulses to come from this direction at the moment. The Chinese are, nevertheless, very fast and after they have successfully made their machine building capabilities fit for the world market, they will probably succeed here, as well.

And how’s it going in the USA?

The USA impresses me the most right now. After decades of decline in manufacturing, the National Manufacturing Initiative has now been equipped with enormous subsidies. Five major centers have been provided with USD 320 million a year each for a period of five years. A princely sum. However, colleagues in the United States say that they will need three years to get to the level of our SmartFactoryKL today. That’s because professionals who can program NC machines or PLCs are scarce. It will take time to fill this vacuum.

Is the procedure in the United States different from other countries?

The crucial difference is that the USA uses much more IT. The lifeblood of the Smart Factory is the triad of information and Internet technology, the world of machines and automation. German industry reigns supreme over machines, embedded data, stacking assemblies and automation. US firms dominate the IT sector.

When can we expect to find a widespread distribution of Smart Factories?

Most likely not earlier than ten years from now. It also depends on the depreciation periods in factory construction. Companies need investment security for the next six to ten years. Nobody replaces a system after two years because new cyberphysical components have become available. Therefore, software will handle functionality in the future. Overall, we are on course. Test the feasibility, work together, try new things – that’s the key. We need the experience, we need the pilot plants. And we need companies that open their doors to each other and work together with research facilities on future technologies. 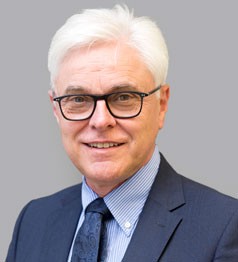 Prof. Dr.-Ing. Dr. h. c. Detlef Zühlke is head of the innovative factory systems research field at the German Research Center for Artificial Intelligence (DFKI) and initiator of the technology initiative SmartFactory KL e.V. in Kaiserslautern. Together with industrial partners, he has created the world’s largest cross-manufacturer research and demonstration platform for smart technologies. The Industry 4.0 plant is the only one in the world that creates a production environment by connecting purchasable components using plug and play. The 40 members of the technology initiative work together actively in order to develop and realize the vision of Industry 4.0.

Networking and investing: Moving one step at a time toward Industry 4.0