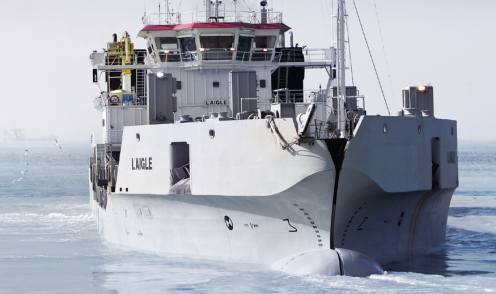 With courtesy of DEME

Bosch Rexroth is an experienced partner in the dredging industry. When it comes to hydraulic systems for cutter suction dredgers, Rexroth has developed various high quality standard solutions.

A split barge is made up of two halves, which can turn around each other on hinges. The hinges on both halves are connected with hydraulic cylinders. When unlocking these two halves, starboard and port side, the vessel splits in longitudinal direction and the load will be dumped automatically due to the construction of the hull. Once the load is discharged, the hull shape/construction also forces the two halves to join again and the hydraulic cylinders are retracted.

Bosch Rexroth also supplies the complete drive and controls for split barges in order to optimise the proper function of this essential part of the split barge,. The control part consists of a central control panel with all relevant functions of the hydraulic installation. Optionally a local control panel can be used.

The hydraulic cylinders for split barges, form an essential part of the vessel. As these cylinders determine the proper functioning, special care and attention must be paid to each and every element. No wonder Bosch Rexroth delivers these cylinders worldwide to the dredging industry. The split cylinder is a double working pulling cylinder of the regenerative type.

Hydraulic cylinders and winches on board the split barges need to be safely controlled by means of hydraulic control valve blocks. The winch blocks can be provided with optional functions like adjustable hydraulic motors, brake control, speed control, constant tensioning, etc.

Related products to our split barge solutions include: