Automation systems under control via Smartphone and Tablet PC

Smartphones and tablet PCs are becoming ever more important in offices and production halls: Glaub Solution GmbH , based in Salzgitter, Germany, off ers a native app, which facilitates the comfortable control of entire automation systems via smart devices. The system is based on the Rexroth framework Open Core Engineering with the interface technology Open Core Interface and the controllers MLC and ILC .

Today, machines in automation systems are still mainly being operated via graphical user interfaces on stationary devices. Glaub Solution aims at providing even more intuitive and flexible solutions for the visual operation of such installations. In 2012, the company started to develop an app to transfer the machine operation to iOS- and Android-based smartphones and tablet PCs. The mobile and wireless smart devices offer significantly more freedom of movement. Multitouch screens, voice control and accelerometers enhance the usability and efficiency of the system.

Glaub Solution’s earlier attempts to realize app-based operating concepts did not yield the expected results. With Rexroth’s Open Core Interface, Glaub finally succeeded in developing a genuinely operational user interface for the iPad. The benefit: Open Core Interface allows to directly access the control core via common high-level languages such as C++, Objective-C or Java. The operation and control of the system can be transferred entirely from the PLC into the app.

Implemented within a few hours

In order to operate a triple-axis system equipped with a gripper arm, the Glaub engineers utilized an IndraLogic L45 with Open Core Interface. During the subsequent implementation of operation, diagnosis and teach functions, the developers were even able to use some standard function libraries from Rexroth. The access to the PLC variables, the axis functions and the diagnosis memory was realized with Open Core Engineering function libraries. The PLC was configured by means of the Rexroth engineering tool IndraWorks .

Intuitive and visual operation of automation systems via app on smartphones or tablet PCs.

"With Open Core Engineering from Rexroth, we can actually design user interfaces for machines, which are fun rather than intimidating and increase motivation among colleagues when carrying out their tasks." Niko Glaub, Glaub Solution GmbH 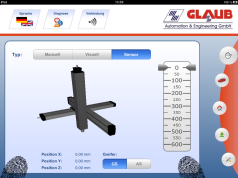